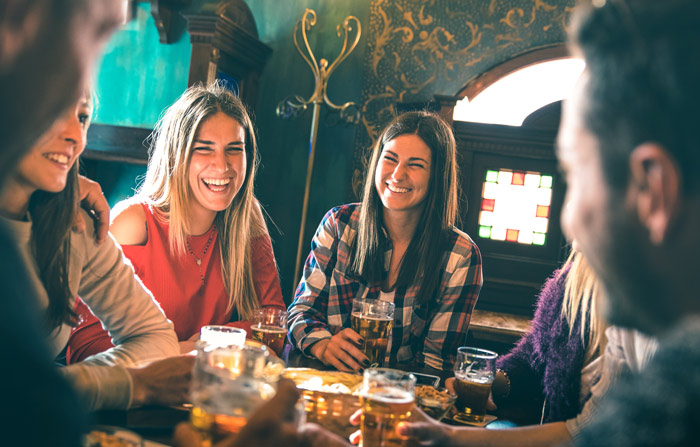 Binge drinking is not a new phenomenon, nor is it even new among college students. Many consider this sort of behavior a rite of passage for young people. There are decades of movies portraying drunken college students and supporting the notion that this is just another part of college life. Binge drinking isn’t just harmless fun, however.

At Safe Harbor Recovery in Portsmouth, Virginia, we want parents to fully understand the risks of binge drinking so they can encourage their children to make smart choices as they head off to college.

What Is Binge Drinking?

The National Institute on Alcohol Abuse and Alcoholism (NIAAA) specifically defines binge drinking as consuming an amount of alcohol in a two-hour period sufficient to raise the blood alcohol level above .08. This generally requires four drinks for women and five drinks for men. This is the level at which people are considered to have impaired judgment.

What Are the Statistics?

According to the NIAAA College Drinking Fact Sheet, 60 percent of college students between 18-22 reported consuming alcohol in the month prior to being surveyed. Of those, 2/3 stated that they had binge drank during that same time frame.

Binge drinking is twice as common among men as women. It is also more commonly reported among young white males than in people of color, regardless of gender.

Most people under 21 who report drinking, also report binge drinking, per the CDC.

Around 1,825 college students die each year from alcohol-related injuries.

Why Is it a Big Deal?

According to the CDC, binge drinking, whether by a college student or middle-aged adult, has a lot of associated risks:

What Can Be Done?

Many colleges, universities, and communities with post-secondary institutions are trying to implement policies and laws that will help address excessive drinking among students.

The federal government has also created a website that can advise parents, colleges, communities, and state officials on what methods are most effective in curbing binge drinking. The website, collegedrinkingprevention.gov, offers the College AIM (Alcohol Intervention Matrix), a tool that uses decades of scientific research to rate the most and least effective strategies for addressing problematic alcohol use in college students, as well as the most and least costly ones. It compares a variety of individual level methods for targeting specific students who may be at higher risk, as well as environmental level methods for addressing the culture of the institution and surrounding community.

At Safe Harbor Recovery in Portsmouth, Virginia, we believe there are several ways parents can improve the odds of their college-aged offspring making better choices around alcohol:

It is also important to recognize that while binge drinking is harmful and can lead to addiction, the two are not the same thing. It is quite possible for most students who engage in problem drinking to stop on their own. If you notice the following signs, however, it is a strong indication that the person has become addicted to alcohol and may need help in order to stop drinking:

If you’re not sure if the person you love has crossed the line into addiction, or is simply engaging in unsafe drinking habits, Safe Harbor Recovery in Portsmouth, Virginia has a team of trained and accredited professionals who can help.

For more information about programs at Safe Harbor Recovery Center, alcoholism treatment center in Portsmouth, Virginia, contact us at (888) 932-2304. We are ready to help you make a new beginning.